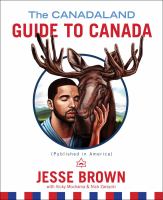 The Canadaland guide to Canada (published in America)

"From the creator of the podcast Canadaland (canadalandshow.com) comes a browsable, hilarious and satirical expose of Canada's little-known dark side. If you think of Canada as a progressive paradise of free healthcare, social equality, majestic woodlands, and good manners, think again. Inside, you'll find illustrations, maps, quizzes, and charts that answer the most pressing questions about Canadian history, politics, and culture, such as: Canadian cuisine and sexuality: Do they exist? What does "sorry" actually mean? Justin Bieber, Rob Ford, Malcolm Gladwell: Why? What is Québec? You'll never look at a Canadian the same way again. Jessie Brown is a journalist and public irritant. Nick Zarzycki is a comedy writer and editor based in Toronto"--Provided by publisher.